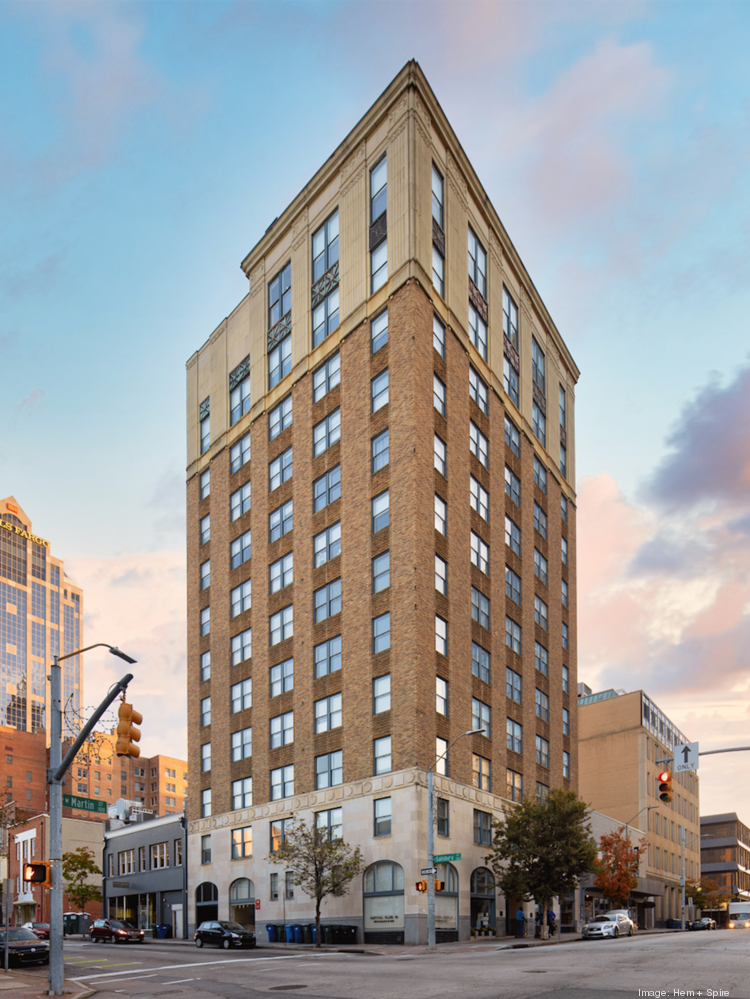 Originally designed by architect Frank B. Simpson in 1929 and built for The Capital Club, one of the oldest and most prominent organizations for men in the South, the 12-story, 55,522 square foot art deco skyscraper was acquired by Hem + Spire for $12.5 million. The Capital Club 16 restaurant is at the bottom floor of the building, with office space on the upper floors which were used as the base of operations for then presidential candidate Hillary Clinton’s North Carolina campaign headquarters. Prominent co-working hub, HQ Raleigh occupies floors 7-12, totaling 22,490 square feet. In addition to helping startup businesses throughout the Triangle, HQ Raleigh also host weddings and galas at The Cannon Club, their ballroom-style event space which is situated at the 12th story of the Capital Club Building. As a whole, HQ has 4 locations throughout the Triangle, with over 230 businesses, $58 million capital raised, and the host for a variety of networking events.

Already a hub for startups and right at the center of everything Downtown Raleigh has to offer, the Capital Club Building is across from substantial growth by the News & Observer redevelopment site, called The Nexus. Occupying where the News & Observer operated for more than a century, The Nexus is a large mixed-use complex of four buildings on the 3.3 acre site. The Chapel Hill-based East West Partners announced that The Nexus will feature a 20-story condominium building that will overlook Nash Square. The condo building, aptly named The Nash, will be almost 240,000 square feet and have 108 units that will range from one bedroom to penthouse suites. Dogwood Properties, who are responsible for overseeing sales and reservations for The Nash, have recently leased storefront space at The Capital Club Building to be a showroom for prospective buyers.

Joseph, a Duke University graduate who started Hem + Spire in 2015, has several high-profile properties in downtown Durham including the historic 211 Rigsbee Avenue purchased in 2015 for $1.4 million, the iconic six-story Snow Building at 331 W. Main St. acquired for $3.6 million in 2016, 433 W. Main St. bought for $2.16 million in 2017 and recently sold in November 2019 for $3.95 million, and the former BB&T Bank building 505 S. Duke St purchased for $1.3 million that same year. Adding the Capital Club Building, Joseph is excited to be a part of this “slice of history” in this time of growth for Downtown Raleigh.

For the past two decades, the area has been one of the fastest growing communities in the U.S. According to Wake County Economic Development’s 2019 report, in the City of Raleigh, new and expanding business accounted for more than 1,200 new jobs and $28 million of investment. In addition, with more than $360 million in new commercial construction, development activity remains strong throughout the area. The Capital Club Building is a part of that legacy of growth and will be sure to be a part of that growth trajectory of that part of downtown Raleigh for years to come.